The Bullitt Center – what an experience!
Q 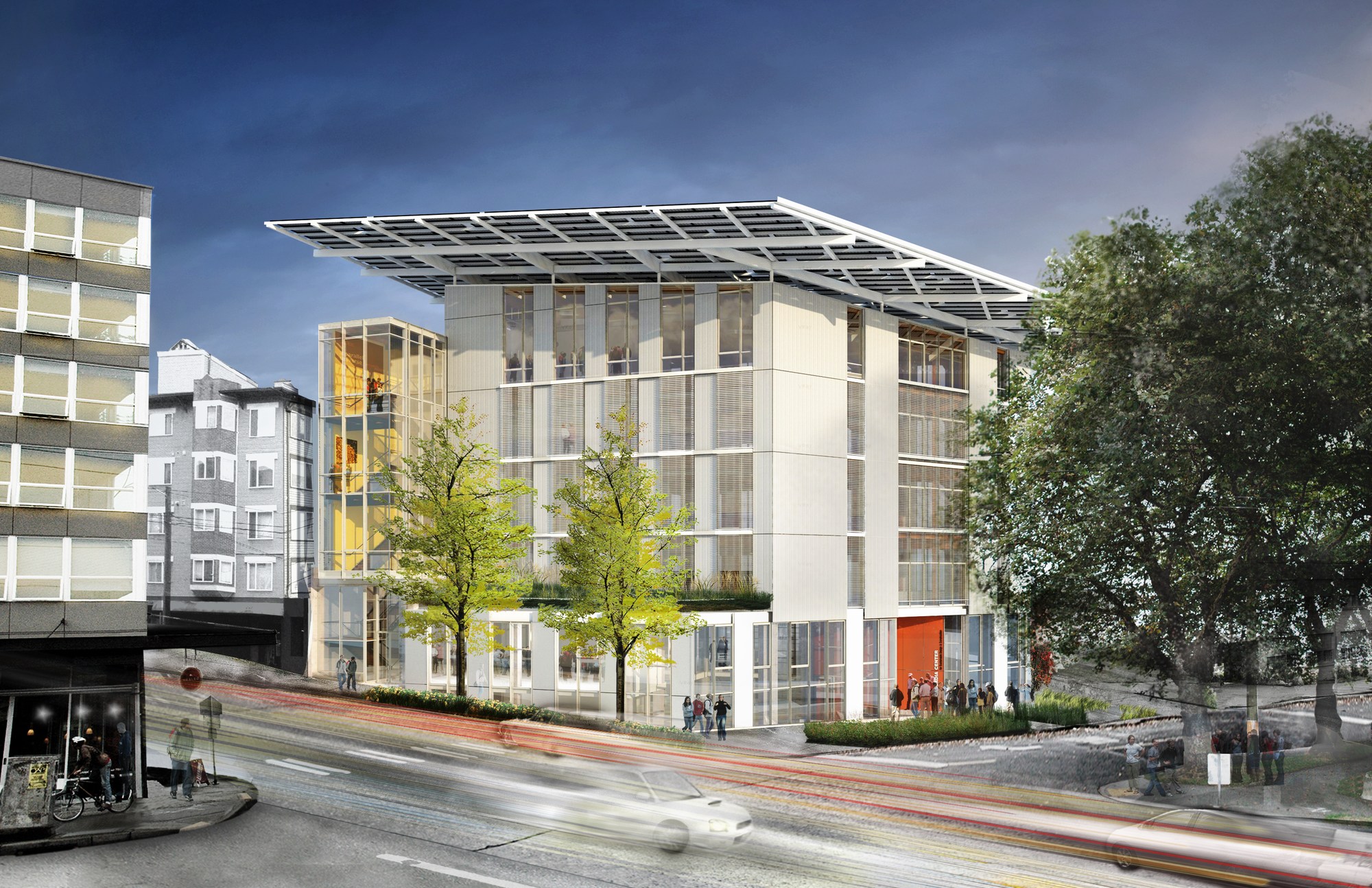 The Bullitt Center – what an experience!

As an LBC ambassador in South Africa, I regularly present on the Bullitt Center case study, and was really looking forward to visiting this truly regenerative building, which gives back more to the environment than it takes from the Earth. 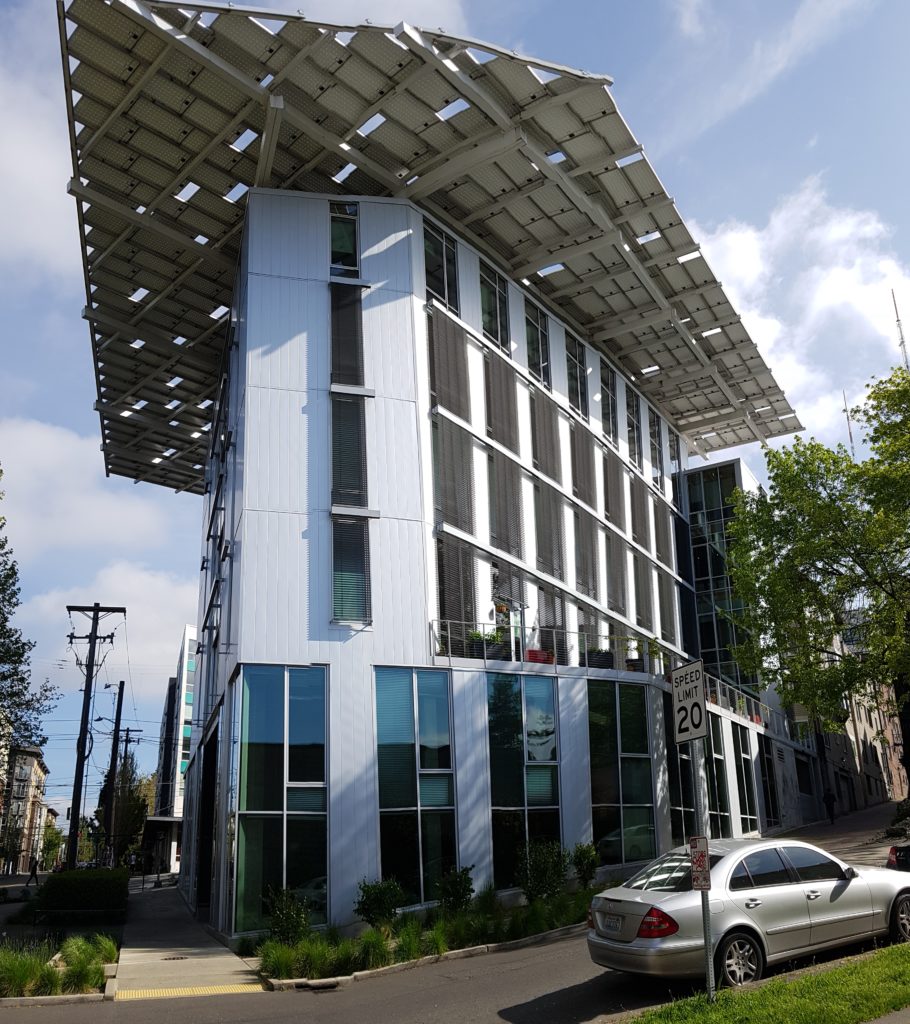 After road tripping for almost three weeks in the USA, I was quite happy to settle down for a couple days in Seattle. The USA is overwhelmingly beautiful, and you really need time to process the experience. I attended the Unconference with Gavin Westbrook from our office. Seattle is a rapidly growing tech city, and a very walkable one. I really love the walking part of experiencing cities, and I miss that in Johannesburg. Walking gives you a sense of connection with the environment and the community you are walking in.

Gavin and I joined a building tour through the Bullitt Center just before the start of the event. The tour was guided by Deborah Sigler, Program Coordinator for the Center of Integrated Design at the University of Washington. Deborah is married to the Bullitt Center’s architect, Robert Pena, and has been very involved with the project from the beginning. I don’t think we could have had anyone better to give us the tour. 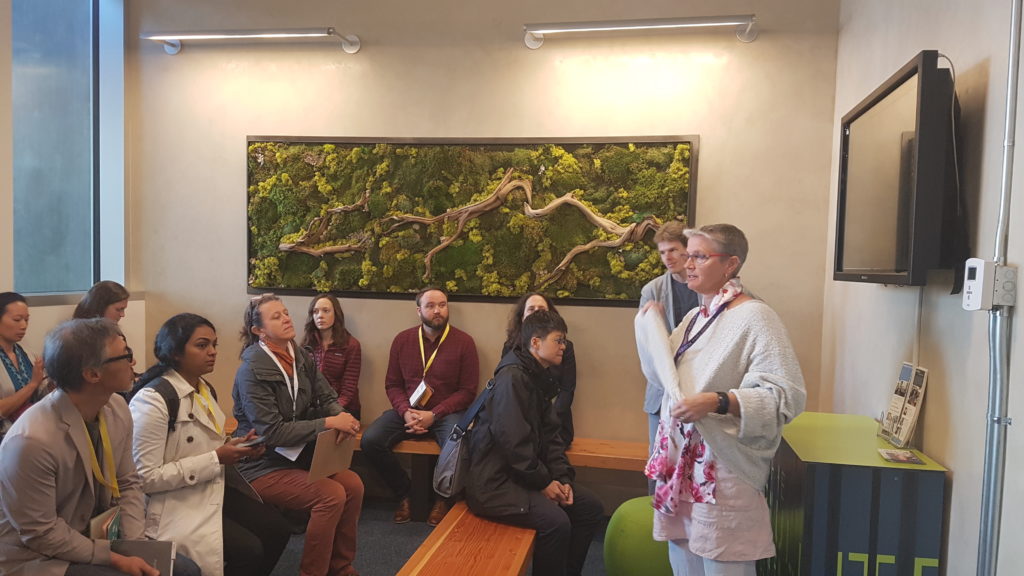 What an amazing building! Aesthetically I am sure that some architects won’t agree with me, but I can see the beauty of this building. It doesn’t use more electricity than it generates; it harvests a sufficient amount of water for all its needs; and all wastewater is treated on site. And much more… 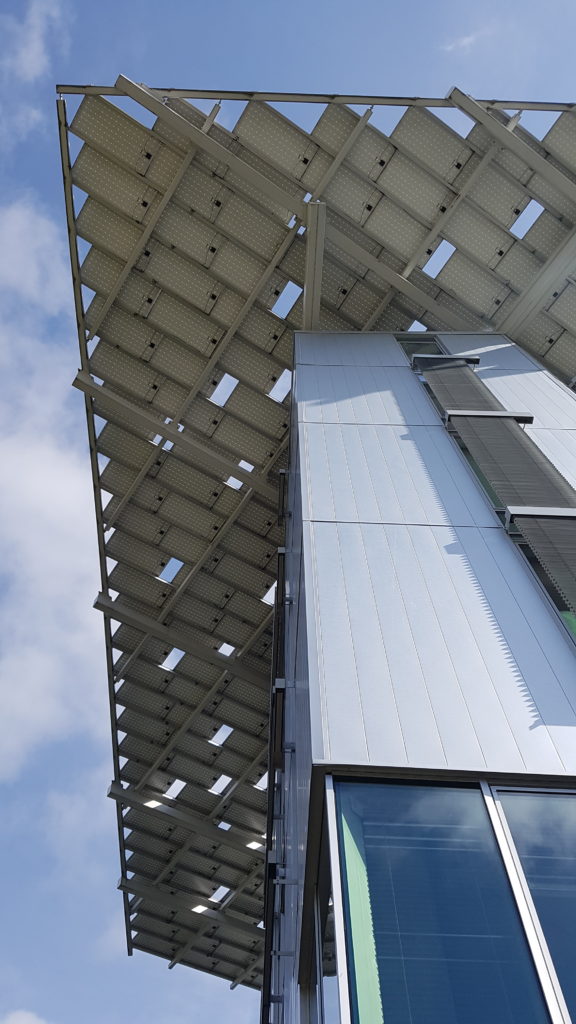 The tour started outside with a chat in the park about how the team managed to close off quite a busy road to create a safe environment in front of the building. The park is now certified as a Living Park. There is no vehicular parking in the building’s basement, which is only available for cyclists, and is filled with bicycles. The public transport in the area is so good that all occupants travel either by bicycle or public transport.

We then entered the real building using the irresistible staircase, which is designed in keeping with the theory that if you make stairs attractive enough, people will prefer using them. This staircase has a 180-degree view over the city, and the view gets better as you climb the stairs. Using stairs obviously helps to reduce the energy needed for lifts, but the main benefit is that people exercise by walking up and down, and socialise as you easily ‘bump into each other’.

Although I am open to most green building technologies, composting toilets often have a negative connotation, and people pull up their noses (literally!) at the idea. The Bullitt Center toilets do not look any different to normal toilets. As you walk into the cubicle the toilet starts humming a little and a small amount of soapy liquid is discharged into the bowl. You do your business and you walk away – no flushing required! No smell, no fuss. 1-0 for the composting toilet. 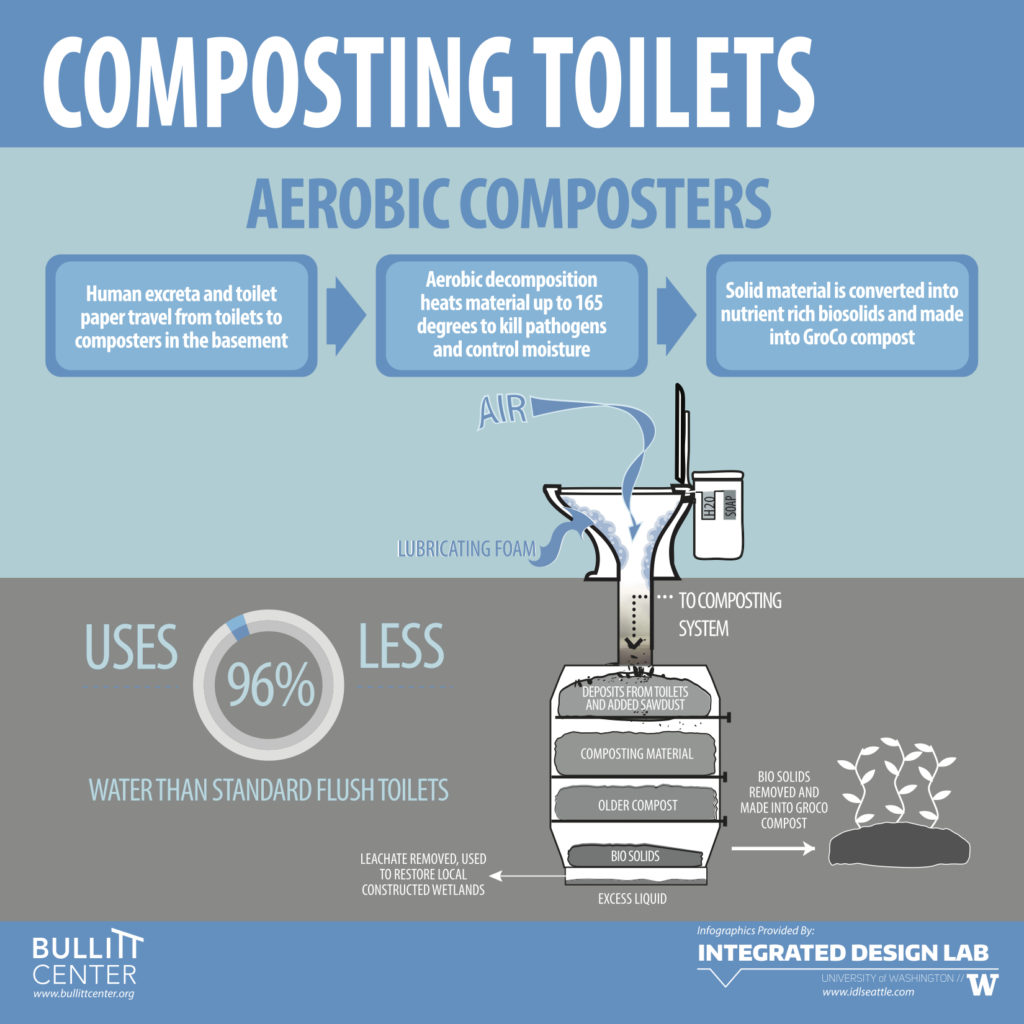 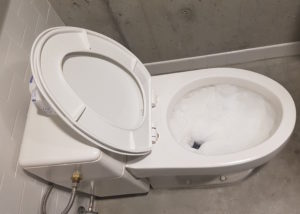 Then we went to the basement to find out where all the effluent is going. The week before our visit, the facilities management team had removed compost from the large compost containers in the basement for the first time in 6 years. They removed more liquids than solids – which seems right as your body consists of 60% water and so do your number two’s. What happens to the compost? Well, some of the compost was put into paper bags, labelled and sold as compost. I obviously had to look into, and smell, the paper bag… it was just compost! 2-0 for the composting toilet.

Rainwater from the roof is collected and stored in a cistern, and is then treated to potable water standards. Due to city regulations, the Center was originally not allowed to use the treated water for drinking water. However, after years of testing the water and talking to the municipality, the treated rainwater was given the go-ahead to be used as drinking water in early 2019. The water is tested regularly to ensure that drinking water standards continue to be met. It also helps that the LBC now allows chlorine to be added to the water to kill bacteria. Chlorine is a Red List Material and was initially not allowed in the building. However, the standard has been relaxed to ensure that the drinking water is safe to drink. 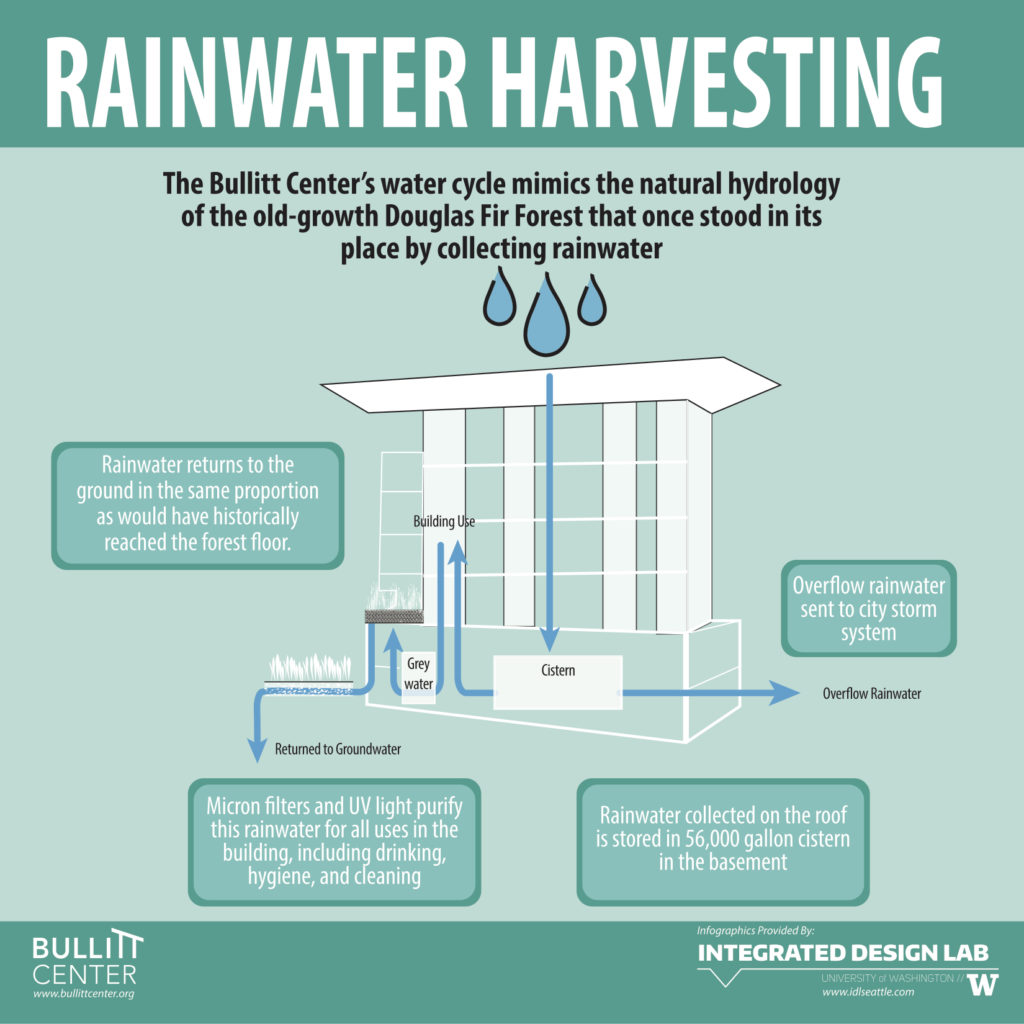 The LBC requires that all wastewater is treated on site. Thanks to the composting toilets, there is not much real black (sewage) water. Grey water is collected and filtered through constructed wetlands on a part of the roof and then trickled into the ‘drainfield’ (a rain garden) from where it evaporates or infiltrates the ground. 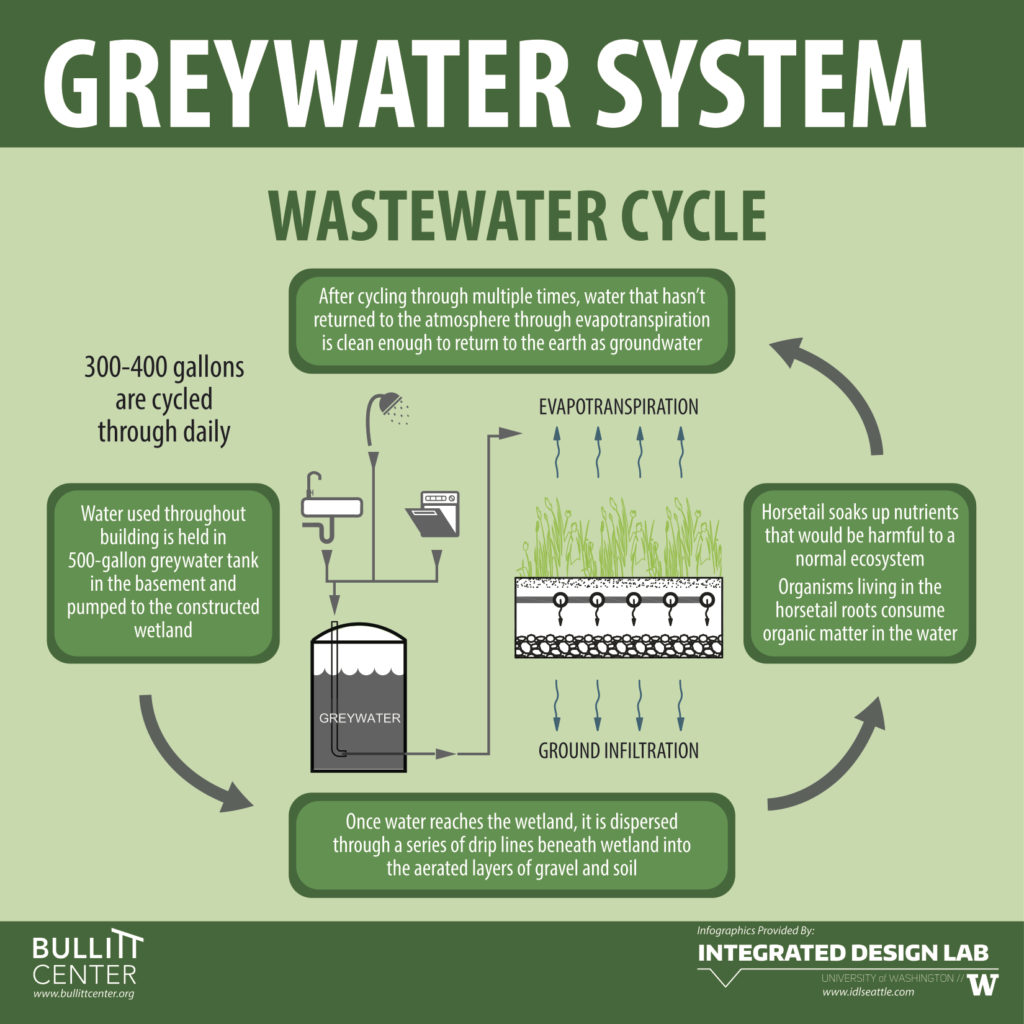 The Center has four floors – the ILFI resides on the ground floor; the Bullitt Foundation is on the top floor; the engineering company that was involved in designing the building rents a floor; and a fast-growing tech company also rents space. Walking into one of the office floors gives you that ‘wow’ feeling – with plenty of natural daylight, and lots of timber used in the structure that has a very comfortable feel to it. Dogs are allowed in the office – Seattle has doggy daycares and cat-hugging coffee shops, so I guess pets are quite important to the city residents. 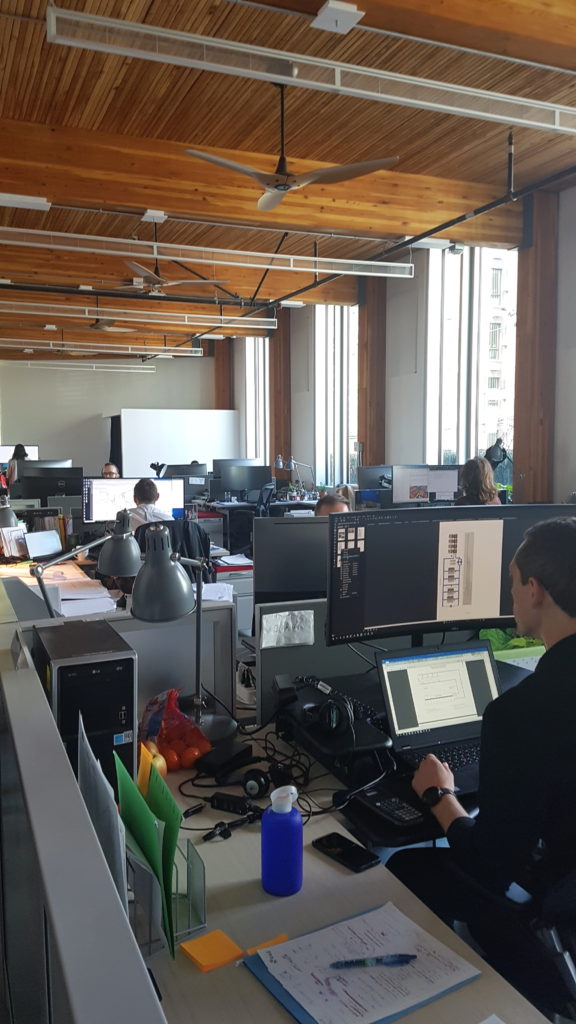 All the electricity needed in the building is generated by 575 PV panels on the roof (approximately 1400 sqm). To make this work, the building had to be designed as efficiently as possible. With the limited available space on the roof, the building had to be 50% more energy efficient than a LEED Platinum building (think 6-star Green Star equivalent). The building envelop was carefully designed to optimise daylight but also to minimise cold coming in through the windows. Seattle’s climate mostly requires buildings to be heated as opposed to ours in South Africa, where we predominantly need cooling. Each tenant gets an energy budget for the year and needs to work towards that – when you use more, you pay more. Any surplus electricity generated is fed back into the grid.

My visit to the Bullitt Center exceeded my expectations, and I left inspired by the developer’s vision and the professional team’s commitment to making this ambitious project happen.

For more information on the Bullit Center, visit www.bullittcenter.org

← Prev News ItemPaying for Pollution: the shadow price of carbon