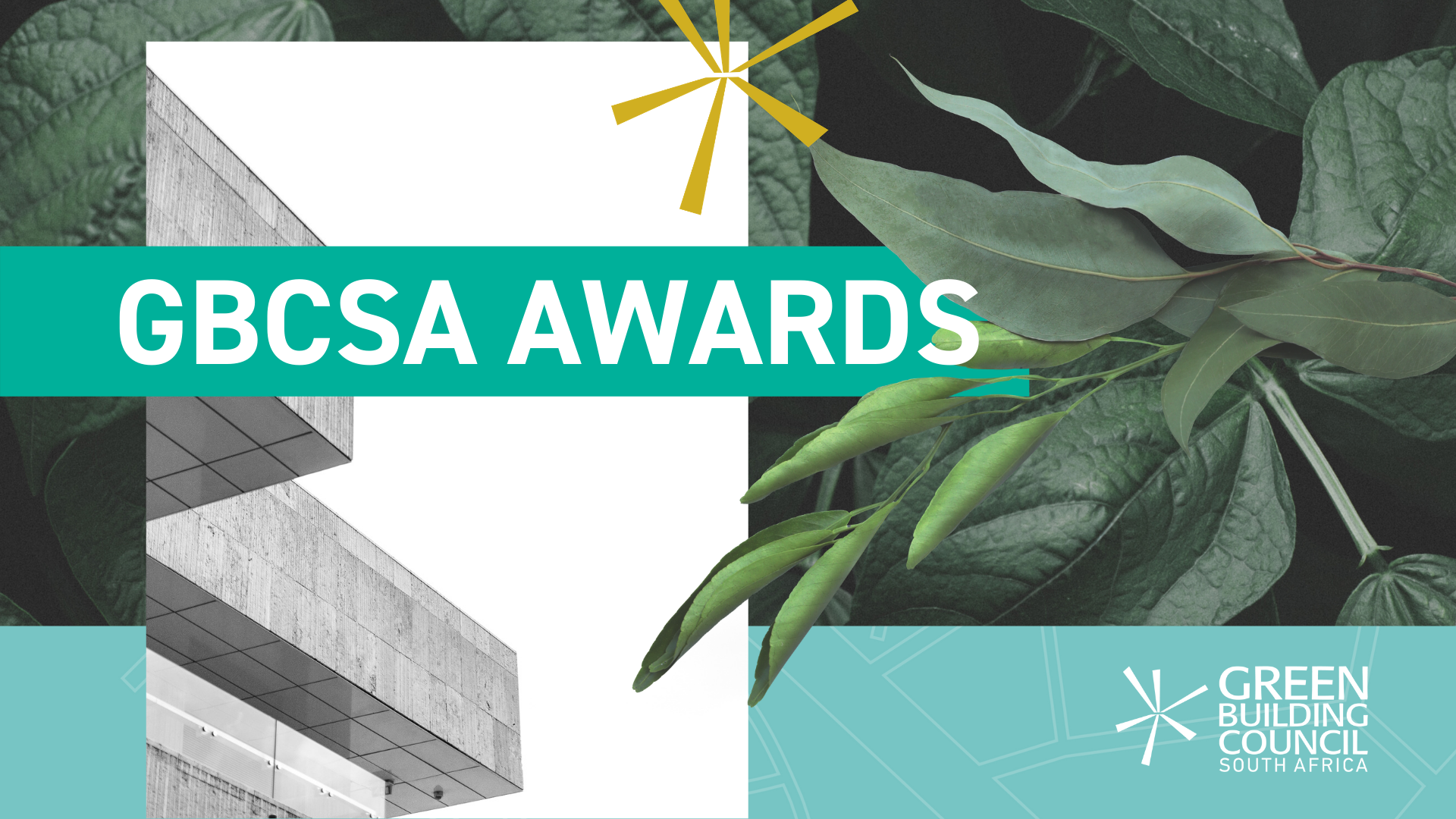 The Solid Green team virtually attended the 14th Green Building Convention held by the GBCSA from 2-4 November, taking up the opportunity of being fully engaged in the presentations and robust dialogues that were had during the convention, from a safe distance. Nomamfengu Mbele tells us more.

The main theme of the convention was ‘ONE’. As Lisa Reynolds, Executive Director of the GBCSA, noted:

ONE represents action – aggressive, ambitious and innovative. ONE represents one people, united against the threat of climate change. It represents one individual after the other joining together to create ONE collective that has the power to change everything.

On Day 1, the team kicked off the convention with a pre-convention catchup at our new offices on 33 Sixth Street, Parkhurst. Aside from being a great time to meet up after almost two years of online meetings, we were also able to strategically plan which parallel GBCSA convention sessions we would be attending and which conversations we were most excited to explore. 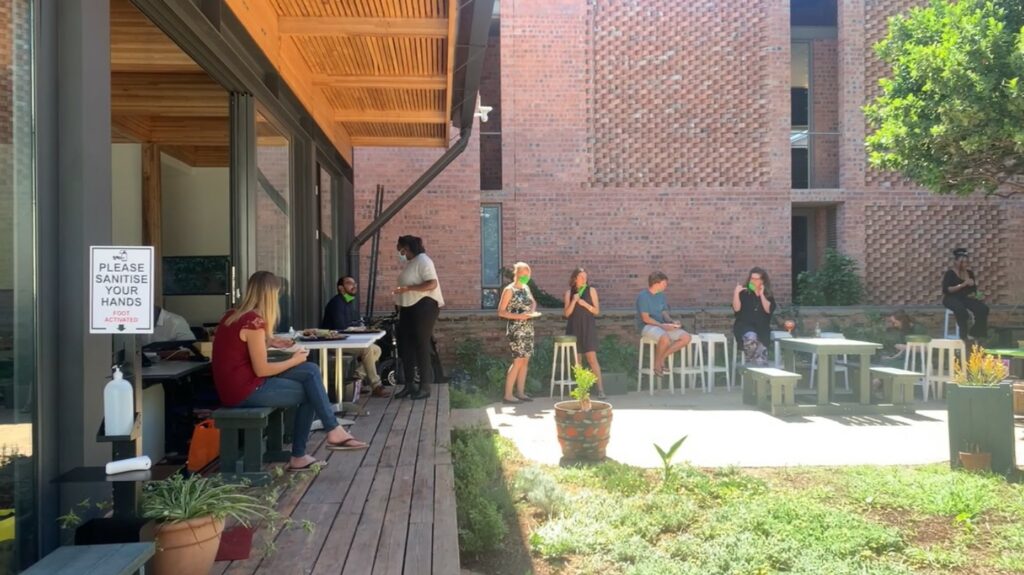 On day 2 and 3 of the convention we were fully immersed in the parallel discussion sessions as we spread out into our various interest areas.

The emergence of ESG (Environmental, Social, and Governance) investment and its relationship with the green building industry

Liberty two˚degrees sponsored numerous sessions centred around the hot topic of ESG investing with discussions around the basis of ESG strategies for property development, and the role that integrated development plays in improving investor relations and development reputation. This included the emergence of property developers who look at moving beyond certifications to producing better products for their end-users that consider long-term impacts on communities, minimize environmental harm and implement good governance. This is potentially an interesting transition for the sustainable built environment to begin engaging with developers to push thinking towards community engagement, precinct scale sustainable initiatives, and development that fosters diversity and inclusivity.

The importance of water saving mechanisms in our construction industry

Rand Water was one of the main sponsors of the GBCSA Convention. Their statistics show us that in South Africa, a water-scarce country, water use is at 233L per capita per day compared to a world average of approximately 170L per capita per day. Rand Water then presented on the strategies they have implemented to promote water conservation and generate sustainable water which includes advocacy and research. Rand Water has also partnered in post-graduate scientific programmes that support water conservation and generation; and has launched a water wise calculator app which can assist the consumer in understanding their water usage behaviour and how it corresponds with their water bills.

Other discussions covered investment in energy efficiency, which creates three times more jobs than investment in fossil fuels; exciting developments such as legislation recently passed by South Africa that requires larger buildings to report and display energy performance according to SANS; and how some projects have used eco bricks as void fillers. 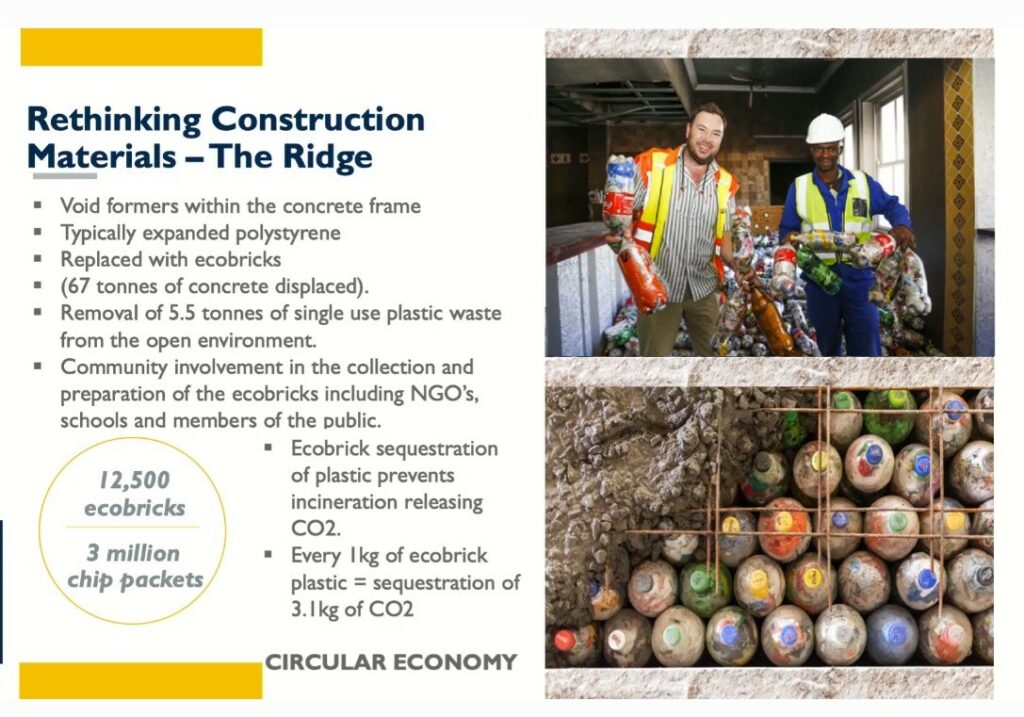 At the Day 3 Awards, South Africa’s top-rated Green Star projects were announced. Solid Green’s Zendré Compion was the accredited professional on the Balwin Head Quarters (owned by Balwin Properties). This 6-Star rated project placed 2nd for the Highest Rated Building category, and it is targeting a Net Zero Carbon and Net Zero Waste v1 Rating, as well as an Office As-built rating. 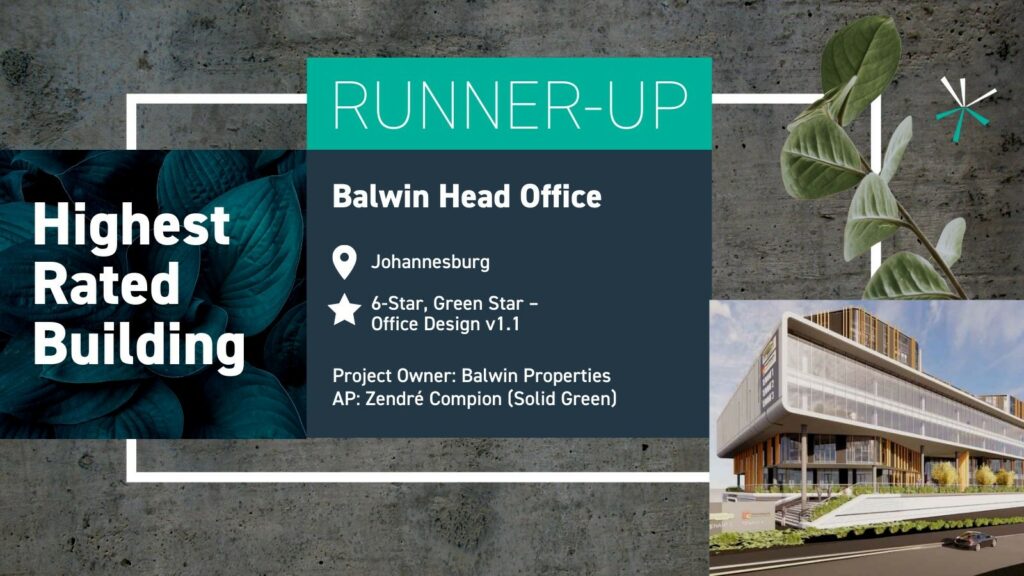 We are especially proud of two of the dedicated, powerful members of our team who brought home GBCSA Leadership Runner-up Awards. Dashiell Coville was named runner up for Established Green Star – the GBCSA recognised his incredible work in bringing sustainable development to the rest of Africa which included making the Green Star rating system fit the slightly different social and environmental contexts in other countries. The work done by Dash resulted in the first Green Star rated building in Botswana, Prime Plaza, and the first Green Star rated office in Nigeria, Project Windsor. Both received 4-Star Green Star Office v1.1 Design ratings. 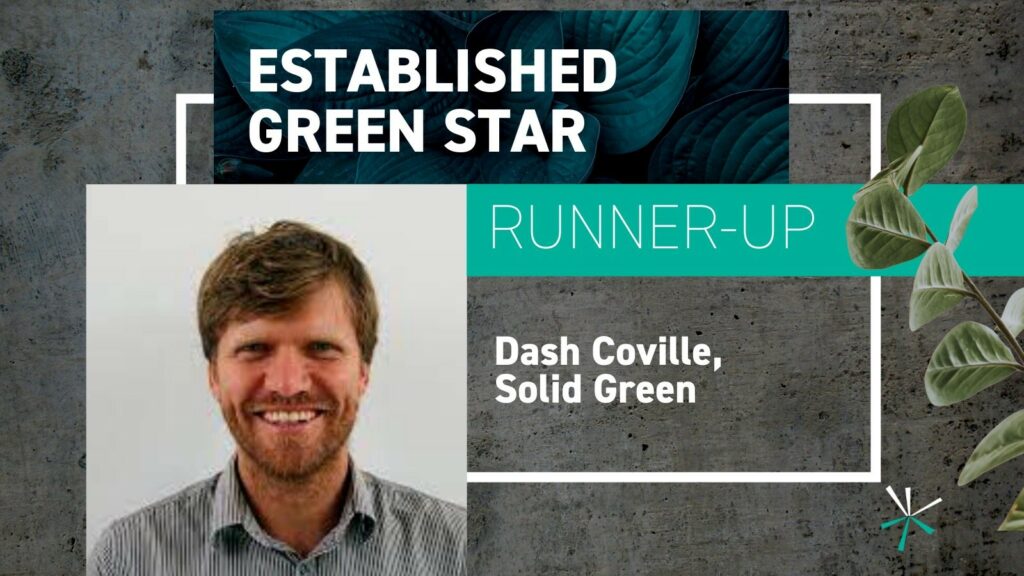 Alex Varughese, who won the runner up for Rising Green Star, has over years’ 5 experience in delivering Green Star rated buildings with Solid Green, with a focus on the energy performance of buildings. In the last two years, Alex has worked on over 35 Edge, Green Star, Net Zero and New Build certifications, advising project teams on how to rethink their energy use, glass performance and alternative modes of energy.

“It was a wonderful surprise to be nominated and a privilege to be the runner up in the Rising Green Star category, says Alex. “I am super excited about receiving this award. As a company and team, we put a lot of work into every green building project that we are involved in, and it is wonderful to be recognised for the work done. I want to especially mention and thank my colleagues in the modelling department at Solid Green for all the for hard work, assistance and collaboration that is required for all our projects. While winning the award is an amazing achievement, I understand that this is just the beginning and more will be required to achieve “greener” buildings in South Africa and beyond.” 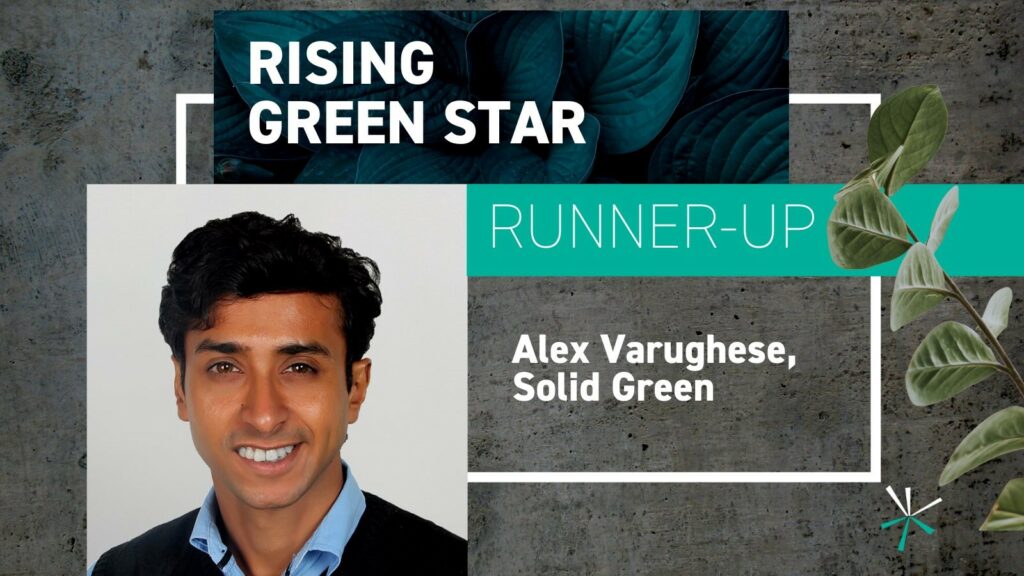 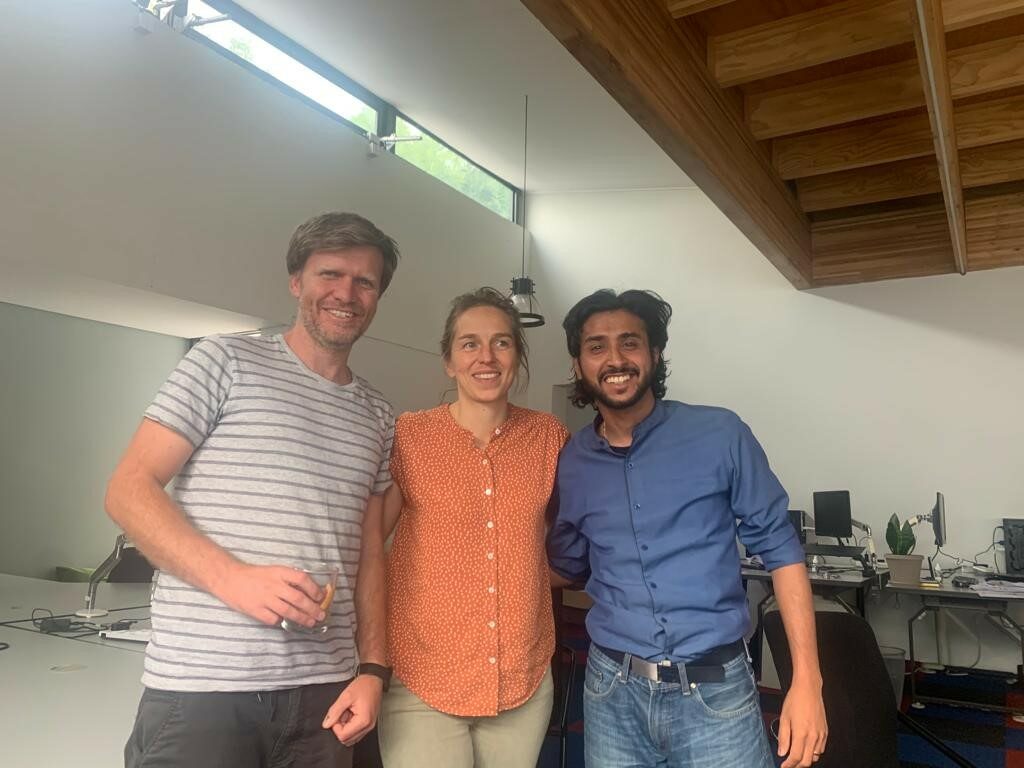 We are very excited about the transition of the green building industry which was showcased through the convention, and we are extremely proud of the excellent contribution that our team is making towards furthering the sustainability agenda across the continent. We look forward to participating again at the Green Building Convention 2022!